I had to do it. I signed up a month after the accident that left me in intensive care for weeks, again for the full Ironman, October 2018 in Barcelona,. I needed a goal to motivate me to recover. And prove to myself I could do Ironman, even if the last attempt almost killed me. Let’s hope I don’t have a fight with a Land Rover 5 weeks before it this time. 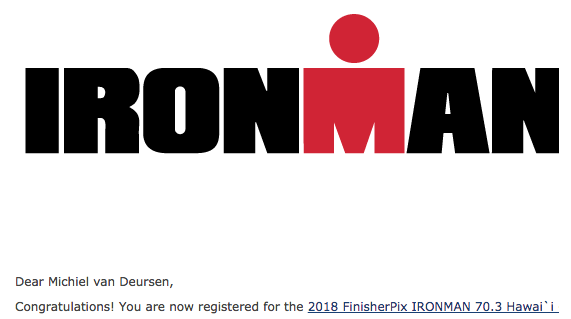 Last year I did a half Ironman in July, in preparation, in Saint Petersburg, Russia. It was such a great experience and gave me a real insight into the distances. I knew it would be a great idea to do that again this time, and Holly agreed. It had to be in June, to fit in my training, and in a place I had never been before, of course. In the end, the choice was between Kazakhstan and Hawaii.

Ironman started in 1978 in Kona, Hawaii. How amazing would it be to be there at their 40th anniversary? In such a beautiful place! On the roads where triathlon heroes rode before!

It turned out it was not actually as easy as it was in my head. Flying there is a few days, and now imagine doing that with a bike and all the sport equipment we needed. Also, the time difference is 12 hours. With some careful planning and hope that it will go smoothly, it was decided, Hawaii it was: June 2, 2018, half Ironman distance. I signed up that very minute! Then realised maybe I’ll have to start training in the night to be in the Hawaii time zone beforehand!?

But, focussing on those positives: it is HAWAII! Beautiful weather, a city named Honolulu, volcanoes and a blue sea. The start and finish line is in a beautiful hotel that we are also staying at, now I cannot WAIT to go!

At 8 am I am already biking after a swim!

The Great Wall of China