The Yonghe Temple represents the “Palace of Peace and Harmony”. It is also known as the Yonghe Lamasery, or popularly as the Lama Temple. It is a beautiful place, right amongst the city, a temple and monastery of the Gelug school of Tibetan Buddhism. 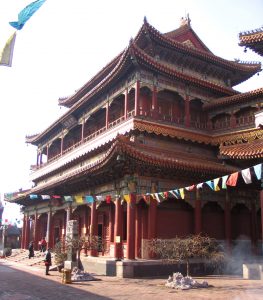 Building work on this Temple started in 1694 during the Qing dynasty. It originally served as an official residence for court eunuchs – a man who has been castrated, especially employed to guard the women’s living areas at an oriental court, so he would have no sexual desire for them, or if he did, couldn’t act on it. 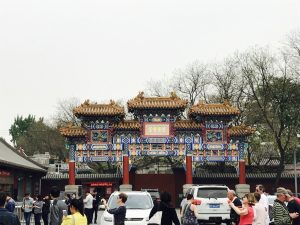 The building and artwork of the temple is a combination of Han Chinese and Tibetan styles. 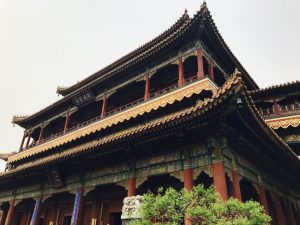 The colours were so beautiful, and the smell of incense everywhere was incredible – I love incense!

Buddhist practitioners light and burn incense sticks. They raise the burning sticks above the head and bow to the statues of Buddha. Then they place their sticks vertically on burners from which smoke wafts. 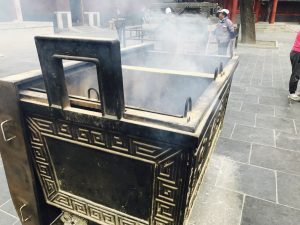 They do so in a hope to talk to the Buddha who will appear in the smoke.

Incense burning is a common Chinese religious ritual in Chinese Buddhism as well as Chinese ancestor worship and Taoism. The most common practice is that people burn three sticks of incense at once, one for the Buddha; another for the Buddha’s teachings, known as the Dharma; and a third for the community of Buddhists, the Sangha. 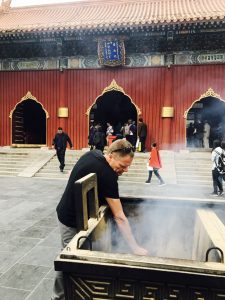 It’s nice to soak up the culture and traditions in these places, so we always have a go ourselves!

The smoke is a soul link between worshipers and the Buddha. With joss sticks burning, people are getting closer the Buddha and it also reminds us to burn ourselves, to give and to sacrifice though in reality. 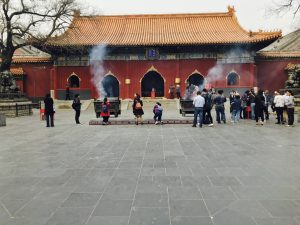 Many people come here praying for health, love, money and everything in between. There were of course tourists, but also a lot of the people we could see were locals, and came here daily to socialise and pray. 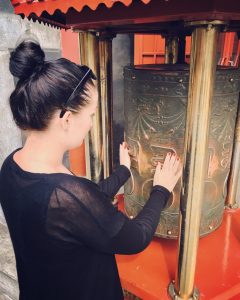 A prayer wheel is a religious item used by believers of Tibetan Buddhism. It was so beautiful! Such a unique work of art. Traditionally, Buddhists turn prayer wheels in a clockwise direction. It is believed that turning the prayer wheel once is the same as having read the Buddhist Sutras. I had to have a go too!