To Russia, with bike

Doing Ironman is almost easy compared to taking your own bike to a race in Russia. I agree, this is a bold statement, but you can judge for yourself…

I booked via Delta: “Please contact Aeroflot”. Aeroflot: “You have to call the operating airline sir, Rossiya Airlines, if you want that. The number? I don’t know, find it on web”. Rossiya Airlines finally: “We only speak Russian”.

My bike, not just a bicycle is best transported in a hardcover box. A huge box that is. Try to find a Barcelona taxi for that 5 am! Luckily I had some experience and the businesscard of a cabdriver that has a suitable car and mindset. 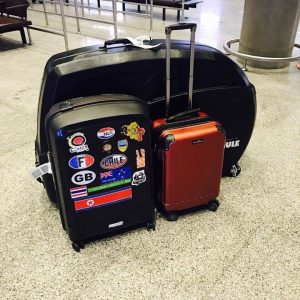 After an hour of waiting in line with lots of impatient Russians, and some confusion, the lady at the desk and her colleague decided the bike could come with us. “But check in at a separate desk first”. OK, no problem, it is only at the complete other side of the airport. Luckily there were no lines and off went the bike! 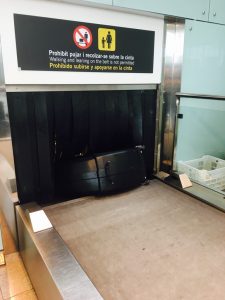 Bye bike, see you in Russia!

OK, I must admit, this went smooth. The bike was waiting for us at the airport already. And the driver we arranged had the car ready for the bike to go to the hotel! Yay! 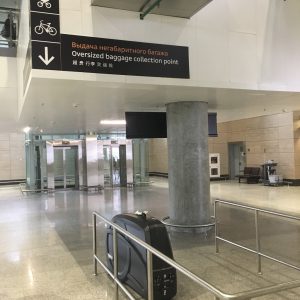 A day before the actual race, all bikes have to be parked at the transition station, the place where you come out of the water, change clothes and jump on the bike. But where was this place? This was one of the hardest parts, as everything was in Russian only! To make thing worse, they changed the location a few times. Time to panic!

We already contacted a guy that was going to race too, Nikolay from Saint Petersburg. He was open for a coffee the day before, and we were lucky. Nikolay knew everything, told us not to panic and would help us get the bike at the race! (He also wrote a doctor’s note as I somehow needed that for the race too, but that is a whole other story…)

Nikolay picked me up at the hotel and off we went! Parked the bike, registered and went home. One more night! 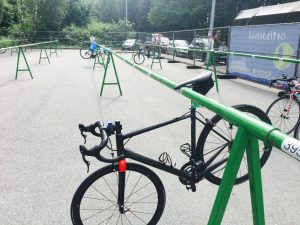 The bike worked like a charm, I finished and it was time to go. But how? We were in the middle of nowhere and no taxi was available, or train station. After calling and negotiating with cab companies, Nikolay came to the rescue again! He took the bike to his house, arranged a lift for us with a fellow triathlete to the centre of town! We survived another day! 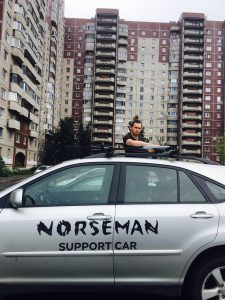 Hardly being able to walk, I reached out to Nikolay. He was at his job already, what a guy. We made arrangements where to pick up the bike that evening, and a taxi would be easy to find from that place. Or so we thought. We flagged almost every car in Saint Petersburg, they all said “Njet”. We were contemplating cycling over the highway in the dark or disassemble the bike in tiny pieces. One final call to a taxi company, I must have sounded very convincing, they suddenly had a car nearby! Only 90 minutes waiting! More convincing, and 30 minutes later Alexandr the taxi driver arrived. We have never been so happy! 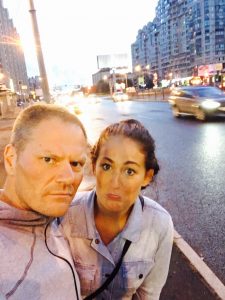 What are we going to do? 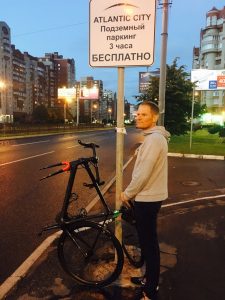 On a Russian street corner, while Holly is hailing cabs. 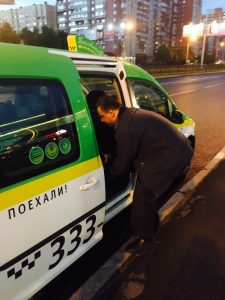 Finally! We cheered all the way to the hotel!

In Russia, everything went smooth again, bike in taxibus. Bike checked in, no problem. 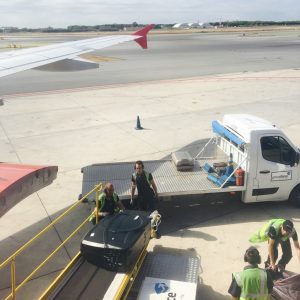 There it is in sunny Barcelona! All is well, or so we thought…

The bike is delivered on a special luggage belt. We went there and waited. There were other bikes. We thought it strange they were not picked up after such a long time. And my bike, we saw it being offloaded from the place, but where was it? Holly had the bright idea to walk around and discovered a similar belt at the opposite side of the terminal. Also special luggage. Same name. Lots of people waiting for their bikes too. My bike was there! After telling the other people where to go for their bike, we had one more hurdle.

After waiting in the taxi queue, we were directed to another taxi queue. And waited some more. A black & yellow stopped in front of us and a friendly man came out. Brought us and the bike home. And there it was. Finally it made it back home.

You can not train for this!