The alarm clock went off super early, I made a mistake the night before. So nervous! Tried to sleep a bit more, but I was already awake. The day of the triathlon! It all felt like it wasn’t real. Good that Holly was there to help!

I was sat down in front of some cups of coffee and a giant bowl of overnight oats, with soymilk and fruit. I had to go to the bathroom 100 times, so nervous! We checked if we had everything, I had put on my swimming shorts and some clothes and waited for the taxi.

Arriving at the transition, I checked the bike, pumped the tires and put on my wetsuit. Our new friend Nikolay told me it was not allowed to undress during the transition, I was glad I had my swimming shorts on! Some more bathroom breaks and after putting on my wetsuit, it was time to race! AAAAAARRRGGGHHHH! 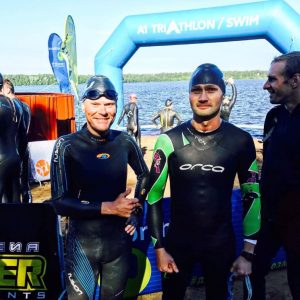 This was the hardest part by far. The water was colder than I was used to, and it was muddy and dark. There were lots of people around me, bumping into me and trying to swim over me. I panicked. I thought about giving up. I swam almost the full first kilometre doing a breaststroke. The parts I tried freestyle I got lost immediately, and went off course. Giving up is not an option however and I did what Holly taught me. Focus on breathing. Relax. Breath every stroke if you need to. Better to concentrate and get it done, and I did. I was so happy coming out of that lake! 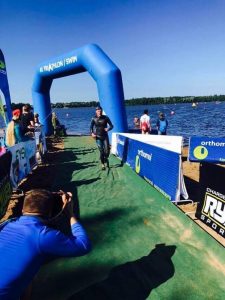 Biking is your strength. You can win valuable time here. These words were a mantra when I sat on the bike after an easy transition. First time wet on the bike, and with my swimming pants under the bike pants, but I was determined & ready to race. Lots of wind, I saw people struggle. I focussed on the people in front of me and tried to overtake them one by one. Little great victories! Eating a bar every 30 to 40 minutes kept me fuelled and I pedalled like I never pedalled before, 90 kilometers long, 3 hours non stop cycling. I made up quite some time and was quite happy with myself! 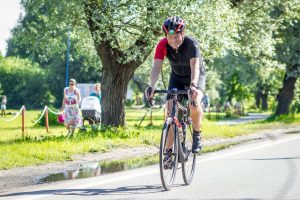 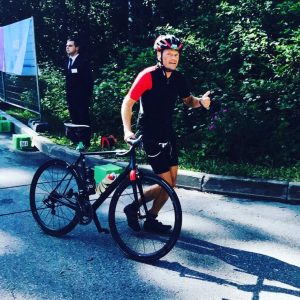 I quickly changed clothes and it was time for the run! 21.1 kilometers to go. On a small footpath. With lots of potholes. Four times up & down the same road through the woods. I ran and ate gels. Feeling I was not going as fast as I normally go, but it was so hard to step up the pace. Keep running, I told myself. Just keep running. The bars and gels gave me some stitches and I had a banana. Holly was standing there, at every lap, cheering! Some other people too. That really helps! If you ever see a race, please support the people, it made me run faster with renewed energy! The last 3 kilometers I ran with all energy I had left in me, and 6 hours 23 minutes after the start, I had reached the finish! 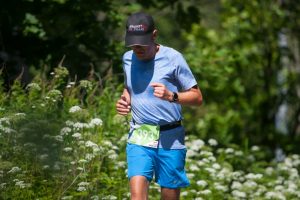 What a day! I felt fully emotional, did not know whether to cry or to laugh. To arrange things, to break down. Crying of happiness, release, tiredness. All that training and now it happened. I had done it!

I learned so much, what to focus on, how to feel, what to do. And look forward to the full Ironman in September. With fear but also with enthusiasm. I am going to do it! 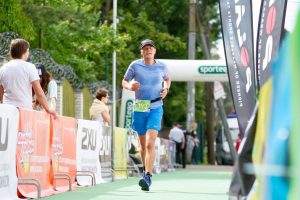 The finish, 6 hours and 23 minutes later…