Barcelona is known for its beautiful sandy beaches, and the meditaranian seas. But, did you know its also now home to around 20 million jellyfish?! Well, us either. Until that day. We were swimming away, on a long swim, Michiel was doing great, I was on his tale, checking his technique, and just at the moment I was thinking how beautiful the water was that day, BAM. Pain. 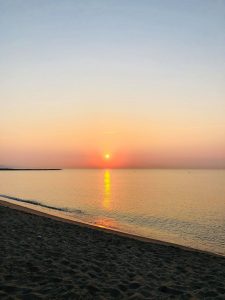 I obviously thought I had been bitten by a great white shark, and promptly grabbed Michiel’s leg, pulled him back, and told him (shouted at him) about my new painful situation. As I looked around me frantically, I noticed it. The jellyfish. Around the size of a dinner plate, peacefully blobbing (what do they do?!) around me, as if it had done nothing. I think I’d have preferred the shark. We finished the swim (I know, what a hero I am), and then after seeing another 3-4, decided it must be an invasion/swarm/plague.

The swim after I entered the water more wary than other times, and low and behold, 1.5km in, 4 jellyfish spotted. Every other swimmer was heading out of the water, and even the lifeguard was advising people not to swim after this! The beaches have even been put on red flag because of the jellyfish!

All jellyfish aside, Michiel’s swimming has improved so much in the recent weeks. His confidence and stamina is amazing – we have been doing a mixture of pool swims, technique spotting, long swims and time trials – with some drills such as holding the float in front and concentrating on having a straighter body, and using the buoy between the legs to ensure the legs come up, and noticing how important stride is. It’s working! Now just to try and find somewhere for the long swims without fearing for our life. Any tips? 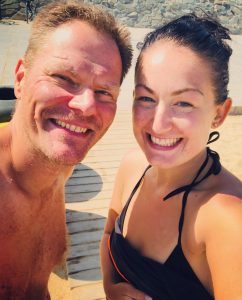 A Swim with a View