It was finally here. The goal that had changed everything, Michiel’s Ironman day. 3.9km swim, 180km bike, finished with a 42.2km marathon run. It still didn’t seem real.

The moment we stepped out of the apartment, the rain came. Pouring down, heavy, and thick, teamed with wind. The walk seemed surreal, so many others, in the dark, in an eerie silence. Pep talks and briefings given to Michiel, it was time to do final checks to the bike, put the wetsuit on, and head to the start of the swim. The air soon turned to excitement, emotion and apprehension – everyone was here with a common purpose, to become an IRONMAN.

As I stood there watching Michiel prepping himself, getting the goggles in position, stretching just how we had practiced, and taking some deep breaths, I was totally overwhelmed with emotion. 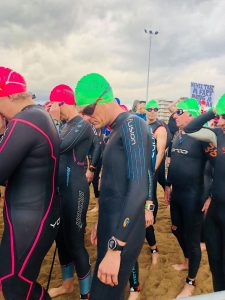 This was not just my client, it was Michiel. My best friend. I couldn’t help but see the scars on his face from the accident last year and I couldn’t hold back the tears. What a journey.

Of course I didn’t let Michiel see the overwhelming blubbering mess I had become, and coach mode was in full swing when he said his goodbyes and I gave my good lucks. ‘You got this, no matter what, just keep going, you can do this’. Off he went, with his klaxon sound, crashing into the waves, straight into the fierce looking water. 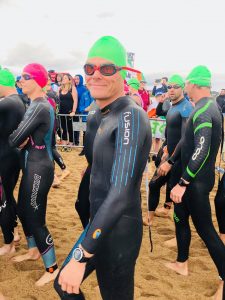 The wait. The craziest thing was to think of how much time I would pace around today. The waiting and wishing game. I was so restless. I wished it was me in that water. He was most scared of this swim. So many people were pulled from the waves and brought back to the shore before it was over, with each person I held my breath trying to see if one was Michiel.

Based on previous swims and the weather, I had predicted Michiel’s swim to be around 1 hour 45-50 minutes. I stood on the shore, waiting and staring. I got chatting to others waiting for their loved ones too, which was a nice distraction, and right then, just as I was talking, I see him. His face bewildered but smiling, jogging up the red carpet towards me. YES YES YES HE DID IT! 1 hour 34 minutes!!! Screaming his name and cheering as loud as I could, he gave me a smile and said ‘Hey Holly’! As if he had just been for a coffee. My goodness, could my heart take this all day?!? 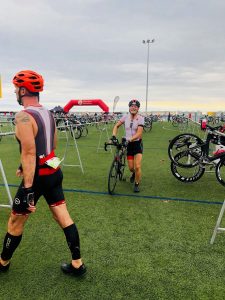 I ran to the next spot, where he would get his bike. I had VIP access, which made so much difference on the day – I was given special access to see Michiel, and much better views! He grabbed his bike, smiled confidently, and I just said ‘see you soon, you got this’, and off he went. YES MICHIEL. YES! I walked away, fist pumping the air, half crying, half smiling like a complete lunatic.

The day before, some of Michiel’s close friends and family had told me they were heading from Holland for his race – how special !? It was so great to see them all, and I soon met with his mum and sister – a welcome distraction and well needed hug! 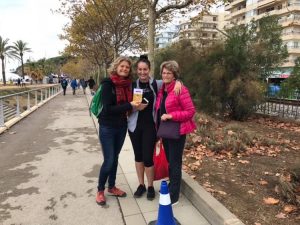 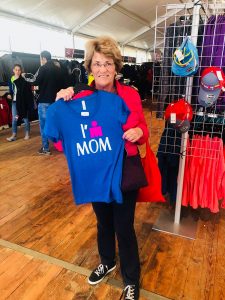 His friends came in a little later, and I gave them all the updates from the day so far – what a hero Michiel was, and how lucky to have these people come to just cheer him on!? The signs were amazing, and I was so happy to share this with them too. 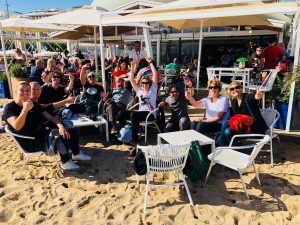 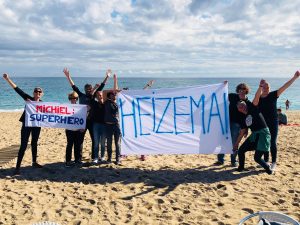 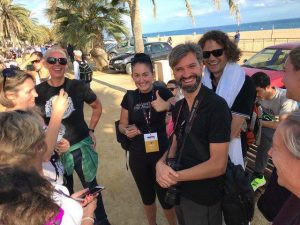 The weather got better, through the tracking, the hours passed, and I could see he was around 30 minutes from finishing the bike section. How was it!? We were usually in constant contact during training sessions, it was hard to not quite know how it was going. Was he in pain? Was he enjoying it? Is the bike ok? Is he drinking enough, eating enough? I just had to trust him and our training, and headed to the transition spot to see him again. Here he comes, running to the bike rack, STILL SMILING, and finishing way faster than we anticipated. We had a quick chat, and he was soon off running into the transition tent. Hero. 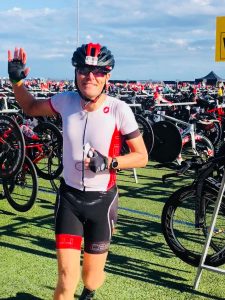 Hat on, running shoes on – now for the marathon. His friends were in place for lots of surprise cheers, and I messaged them with the update when he headed towards them so they could be ready – he was so happy to see them – what a difference some cheering can make!? I cheered so many people on on ironman day – their names on the front of the bib. A quick bit of encouragement can go a long way! 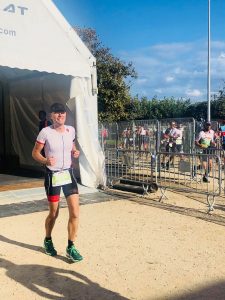 The run was three loops. He had to pace himself. In true Michiel style, he didn’t. 10km an hour. I told him to keep going, listen to his body, and we gave each other the secret hand signal to know he was actually ok. He got this. Each time he passed his friends, we cheered mega loud, and he smiled. 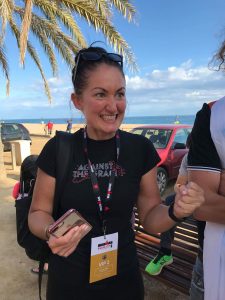 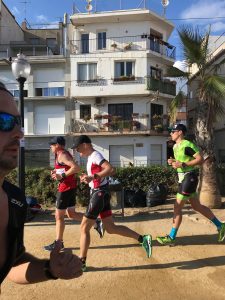 The rain started again, and he had one loop to go, in the dark, in the rain. I decided at this point I would wait in another part, leaving his friends to cheer him half way, and giving him a well needed talk before doing his last loop. Here he is – a little bewildered and filled with adrenaline, but still showing great technique. ‘Just think, the next time I see you – you will be an IRONMAN!’ He took a deep breath, and ran again with a smile. Now the last loop to wait.

I headed to the VIP tent at the finish line, and what seemed like hours went by, whilst I tracked his final kms. 15 minutes before he was due to finish, an ironman rep came to get me.

‘Holly, with Michiel van Deursen’? ‘YES’!?! ‘Come down now, your ironman is on his way, and you get to medal him’!

The finish line. I waited at the end of the red carpet with just his medal in my hand. Seeing so many people finish, so emotional. Then, there he was. Heading towards me, down the finish line, as his friends and family screamed and cheered. The next part was a blur. I screamed, jumped, laughed, cried and just stared at him in complete admiration as he headed through the Ironman sign. He did it. He really did it. In the most impressive time – 12 hours, 54 minutes. 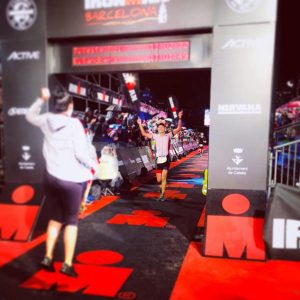 We hugged, and I have never in my entire life felt such a feeling of pride as I did in that moment. Michiel asked me two years ago,

‘Can I do Ironman, do you think’?, and my reply ‘Yes, of course you can, if you work hard enough, you can do anything you want’!

Little did I know how much this would mean to both our lives. This flippant comment soon became a plan. A plan to travel the world, in epic places, the road to Ironman. We should have completed this a year ago. Then the accident. He never once gave up. He simply asked for more instructions on how to do it. Reevaluate, carry on, giving up was never even an option. 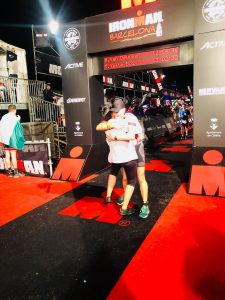 We did it. HE did it.
Michiel van Deursen. You are now an IRONMAN.

The best bike views EVER!?