In the outskirts of Honolulu city centre, located on a highway, was the small aptly named, Peace Cafe. Coming up on Happy Cow as one of the only vegan places on the island, we were impressed by the reviews. 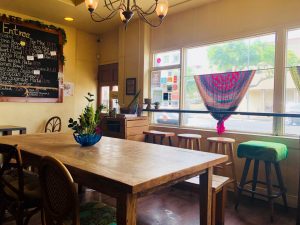 On arrival, the young guy greeted us super nicely, and explained they had sold out of a few things that day – a good sign! 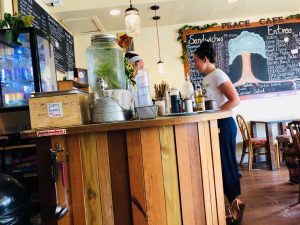 The place itself was very vegan ‘looking’. It was all made from wood, very rustic, and laid back. We ordered the taster plate and the tex mex, some kombucha, and waited. Everything looked a little worn out, and tired, but it kind of added to the effect they were going for – it seemed like we were in a hut on the beach somewhere. Everything very natural. 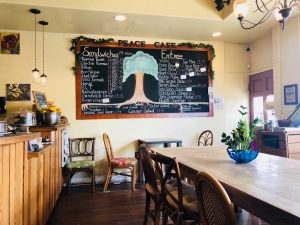 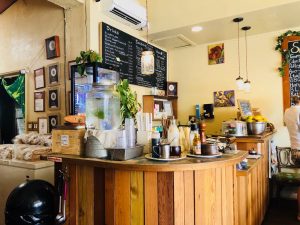 The food came, well presented and with a smile by the chef herself. In wooden bowls, which added to that rustic feel. It was delicious! It was healthy, with no MSG (which seems to be big in the US), no sugar – all organic, and of course, all vegan. We felt satisfied after the big portions, but couldn’t resist their brownie like desert, which was like a marshmallow, and melted in in the mouth! I could have eaten 10 more! 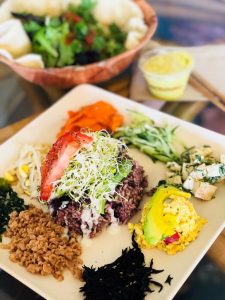 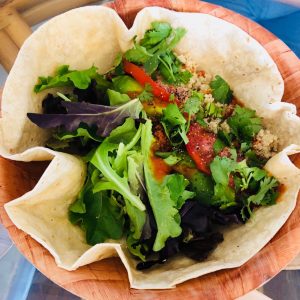 As we paid, we were offered some free mangos from the owners tree, which was a lovely touch. We grabbed a bag, took some mangos and went on our way, feeling full and happy. 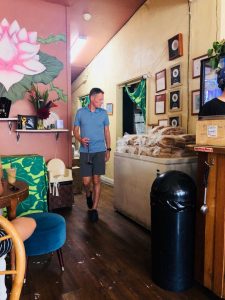 When your trainer says you can’t have bread…