It was time. The ‘big training day’ is what we were now calling it. We were in the middle of Russia, nobody spoke good English, but thank goodness for Michiel’s new found friend, who made finding it, bringing the bike, and everything else SO much easier for us! 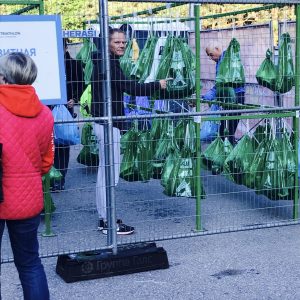 Checking in his bags at the transition stations

Beforehand, nerves were high, and after a tried and tested race day breakfast of a huge bowl of overnight oats and fruit (slow release carbohydrates), it was time to get the swimsuit on, and warm up. 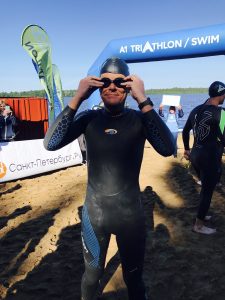 I was so proud of Michiel. He has come SO far in such a short space of time. When you think of Ironman, you probably think of hardcore trainees, that have been working out for years, and excel at it, with years of experience in sport, looking for a new challenge. Michiel – NEVER even swam before November last year. Wow – he inspires me every day! Sometimes he doesn’t believe it himself, but it is a truly incredible task he has set himself (and me) up for, and he is so great at overcoming it all.

I am quite impatient. And waiting, with bated breath for him to finish this was one of the hardest parts for me! I was SO excited to see him on the finish line, and also nervous for him – was he ok? How did he feel? What was happening? What was he thinking? How was his body reacting to this? Is he enjoying it? All of my sessions with him involve so much communication and discussions, and now there he was, off on his own, in Russia, completing a half ironman distance!

I cheered as loud as I could, waited for him at transition points to hurry him along behind the fence and offer words of encouragement and advice, and spent the day rushing to different points to catch a glimpse of him on route. After the swimming, I ran to the  transition with him, I knew the swim was tough for him from the reaction out of the water – sheer relief for having done it.

Seeing him finish in a great time off the bike was incredible, I knew he had given it his all, and was finishing with the pros! I had previously told him that cycling was his strongest sport, so to make up some time on the bike. He did just that! 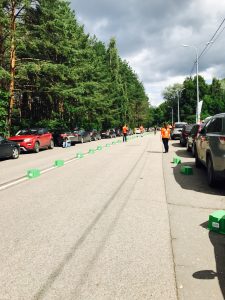 The run was tough. I could see even experienced runners struggling – they had to complete the same lap 4x over – which is hard, to be able to carry on motivated knowing you’d have to do the same thing again, and again… Michiel was struggling when I saw him. His eyes were telling me it was tough, and he was leaning a lot. I told him to stand straight, this was the last thing he needed to do, and he stood up, gave me a weak smile, and headed off. 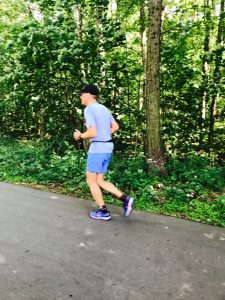 When I knew things were getting tough…

I was able to meet Michiel around 1/2km from the finish line and jog alongside him, telling him how close he was, and that I would see him at the end. I ran ahead to get the pictures, and to see him pass the line.

The proudest trainer in the world. An emotional, tired Michiel came over the line, still running, having completed a 1.9km swim, a 90km bike ride, and a 21km run. Incredible. I could not have been happier for him doing this – such a huge achievement for us both – but especially Michiel, who put in all the hard work on the day! 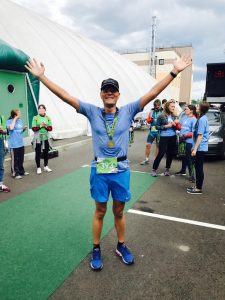